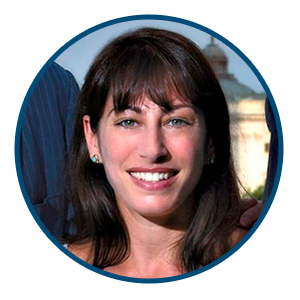 An experienced innovator skilled in conceiving and building ideas into globally-recognized organizations, Carie Lemack has more than a decade of experience in entrepreneurial endeavors, advocacy and security policy. Currently the Cofounder and CEO of DreamUp, an organization bringing space into the classroom and the classroom into space, she focuses on spearheading programs and partnerships to inspire the next generation of innovators and explorers.

Lemack co-founded Global Survivors Network, an organization for victims of terror to speak out against terrorism and radicalization. She coordinated and inspired events globally and produced an Academy Award-nominated documentary film, Killing in the Name. In 2001, she co-founded and led Families of September 11.

Carie has testified before Congress and been interviewed repeatedly on national and international media outlets, including CNN, BBC, NPR, Fox News, al Jazeera, “The Oprah Winfrey Show”, The New York Times and The Wall Street Journal. She authored opinion pieces that ran in The Washington Post, USA Today, The Boston Globe and The Guardian, among others.

Before entering the non-profit sector, Carie worked at technology companies. She spearheaded the creation of both a tech recruiting start-up (managing the marquee client Amazon.com) and the Boston office of a technology incubator.

Lemack received a Masters in Public Administration from the Harvard Kennedy School of Government after receiving an MBA from Stanford University Graduate School of Business. She graduated from Stanford University with a Bachelor of Science degree in symbolic systems. She is a member of the Council on Foreign Relations, a Senior Fellow at GW’s Center for Cyber and Homeland Security, serves on the Homeland Security Advisory Council and the Space Camp Alumni Advancement Board, and remains a lifelong member of Red Sox nation.