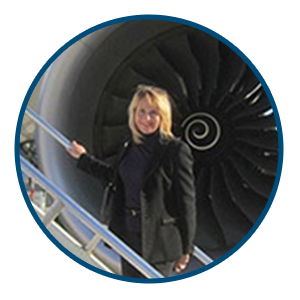 Marilyn is an avid aviation and aerospace enthusiast and on most weekends, can be found at an airport. She has also had the great fortune of making the cross-country trek from Los Angeles to Oshkosh in a YMF-5 Super Waco biplane, Great Lakes biplane, TBM 750 & 800, and a Pilatus PC-12. And she has co-piloted the only two-place British Supermarine Spitfire Mk.9 in the U.S.

With over twenty years in aviation, both professionally and personally, Marilyn’s background includes a wide variety of successes at producing never-been-done-before events such as:

Her professional career has piloted her into holding such positions as Senior Director of Operations for the X PRIZE Foundation, Director of Programs for the Museum of Flying in Santa Monica, Executive Producer for the Pierfest Sea and Air Show, and Marketing Director for U.S. Naval Air Station Barbers Point, HI

Throughout her career, she has had the great fortune to work closely with many talented aviators including Bob Hoover, Donald Douglas, Jr., Sean D. Tucker, Wayne Handley, Buzz Aldrin, Tuskegee Airmen, the WASPS, members of the original Flying Tigers, and many others.

Additionally, Marilyn brings nearly two decades of experience in the planning and implementation of large and small-scale events for non-profit organizations. Her commitment to excellence has led to her personal success in a variety of industries including aviation, space exploration, government and economic development.

Most recently Marilyn worked for with the Los Angeles County Economic Development Corporation, and was responsible for overseeing the LAEDC’s key events including the Annual Economic Forecast and Mid-Year Update, the International Trade Outlook, and the annual Eddy Awards, which during her tenure, honored such organizations as SpaceX, Los Angeles World Airports, Caltech, Magic Johnson, and NBCUniversal.